It is with great sadness the Old Boys Association announces the passing of one of our legendary Old Boys, Martin Moynihan QC.

As a preeminent Justice of the Supreme Court of Queensland from 1984 to 2007, he was a giant of the legal world. No one has done more to improve the Queensland Legal system for the ultimate benefit of the public.

Justice Moynihan was awarded the Centenary Medal in 2001 and appointed an Officer of the Order of Australia on 10 June 2002.

However, for all of the magnificent achievements, Martin was first and foremost an Ashgrove man. Simplicity, Modesty, Humility. He was most at home sharing a laugh with his mates from all those years ago.

The Old Boys passes on its condolences to Martin’s wife, Margaret, and to his children Nicholas, Catherine and Elizabeth.

The funeral service will be held at St Bridgets Catholic Church, 78 Musgrave Road, Red Hill, on Friday 7 April 2017, at 2.00pm.

The family have requested donations in lieu of flowers to Community Paddington and Centacare Enoggera. 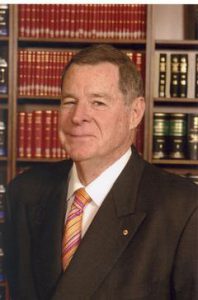