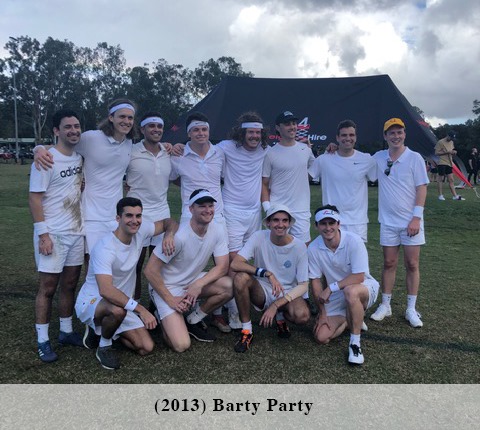 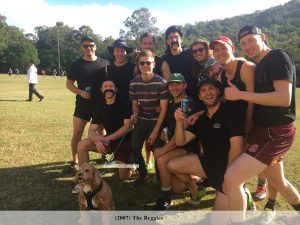 The ‘Just Mossin’ not-for-profit association, set up by OB John (1981) and Julie Tam to create greater awareness in young people after the tragic passing of their beloved son Josh (2013), has held a hugely successful TRL day at Jeeps. 20 teams (male and mixed) took part in an afternoon of great fun and fierce competition. A huge number of Ash OB’s and parents were part of a brilliant community event.

The early focus was on the clash between the much younger and fitter 2013 OB’s ‘Barty Party’ (from Bobbie’s year) who were expected to easily account for the mercurial 2007 OB’s dressed as the politically incorrect ‘Reggies’. But youth, confidence and speed can never match rat cunning. ‘The Reggies’ rolled back the years to hand out an absolute thrashing to their bewildered younger Ashgrove brothers. Captain/Coach Jack Fairweather (2007) humbly noted afterwards “We didn’t want to smash these younger guys – they are Old Boys like us – but at half time we just decided a good thumping was important for their social development.”

But inter-decade rivalries aside, the day was all about raising awareness in our young people of some of the pitfalls in life. The project and the conversation continues. All Old Boys send their thoughts and love to the Tam and Burton families. Your dedication to supporting others is inspirational. And a huge salute to all involved. Old Boys – if you want to help and join the conversation just go to www.justmossin.com  or Just Mossin on Facebook.