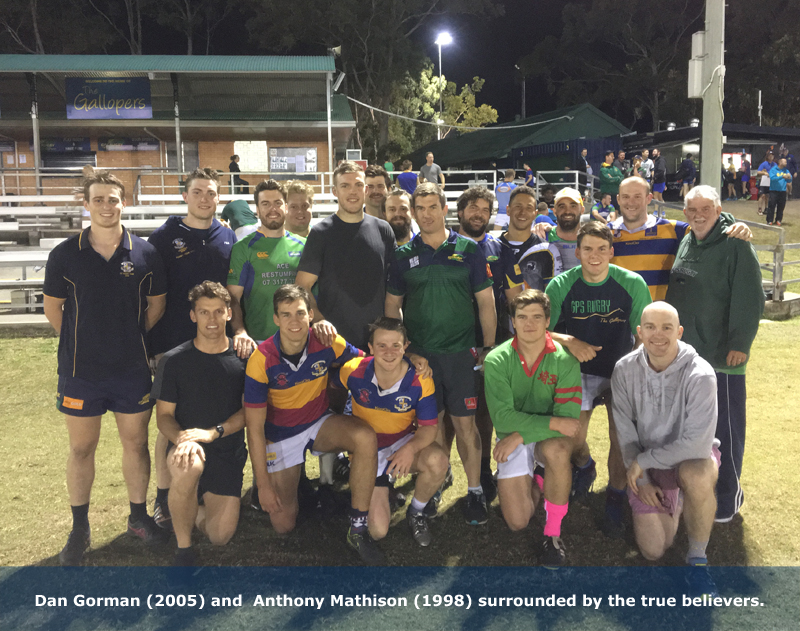 After a season of free flowing footy, Coach Anthony Mathison (1998), Captain Dan Gorman (2005) and a host of other Ashgrove OBs have brought the GPS Gallopers a shot at their first Hospital Cup since 1996. To add some extra cream, Jeeps Premier Reserve Grade, coached by OB Mark Donaldson (2003) and captained by OB Sam Tewson (2006), have also made their way through to the Reggies GF against Sunnybank.

Despite all that Ashgrove know how, Jeeps will still start underdogs. Why ? Because in the other coaching bunker sits Matho’s old comrade and fellow OB, the genius of Mick Heenan (1990). Mick had University smashing all before them this year for a record breaking minor premiership only to be sensationally knocked off twice by Jeeps including the major semi final. Vengeance this Sunday for Heeno ? Ash v Ash. We suspect it might be just as ferocious as those legendary 4ths v 5ths bloodbaths when someone let the boarders out. Old Boys — for an afternoon of running rugby, get out to Ballymore on Sunday for the Reggies kick off at 1.05 p.m. followed by the Mathison/Heenan showdown at 3.15 p.m. .

And if that is not enough, no one thought OB rugby legend, Craig Kassulke (1981), could possibly get Souths second grade anywhere near a GF. But he did exactly that. Kick off Saturday at 5.20 p.m. Best to all our Old Boys across the grades.

Best of luck to all our Old Boys – on the field and on the sidelines. But all this coaching brilliance really only leads to just one question – Are you watching QRU?