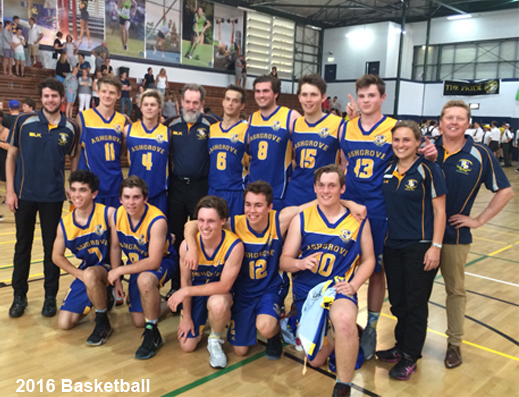 Up by only 4 points at the final break, the boys were forced to dig deep one more time. Home by 56 – 51. The burden all week had been huge. The superb Ashgrove 2016 First V machine went on to the court not only confronting an SLC team determined to halt their unbeaten run but also carrying with them all the tradition and expectation of the other unbeaten teams of 1975, 1994, 1995, 1996, 1999 and 2000; and hoping to be recognised alongside the greatest of them all, Peter Spensley’s 1981 Invincibles.

But all the accolades today lie with our young men of 2016 and the manner in which they have conducted themselves throughout the season. The fightbacks and the sportsmanship. Old Boys can be very, very proud the 2016 team played according to the Ashgrove traditions.

Whatever the generation, the OBA can state two things with certainty – Firstly, all basketballers owe eternal gratitude to Peter Spensley who dedicated himself to the cause during the hard years of the 1970’s and 80’s. His perseverance and love of the game is the foundation for the Marist Carnival and the brilliant program the College enjoys today. Secondly, for all their achievements, the Ash teams have one thing in common – every player had to earn his spot and spill his blood along the way on those old, course bitumen courts – Not a single sporting scholarship in sight. Brilliantly done Undefeated Champions of 2016. Viriliter Age.