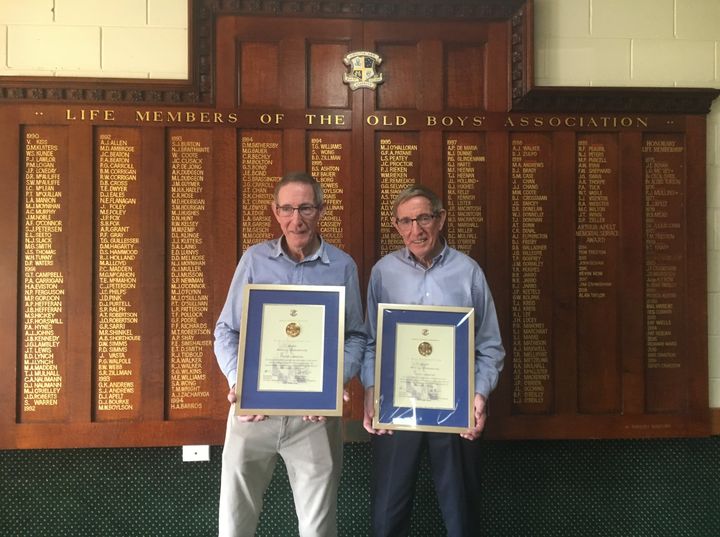 In May this year, the Marist College Community suffered a devastating loss with the sudden passing of our
beloved Dave Cameron who was still, as always, performing a magnificent role as the College archivist.
There was only one man who could put into words what Dave meant to our community.

Dave Cameron, who unexpectedly died on May 4, 2021, was the adopted son of Joyce and Alf Cameron and twin
brother of Derek. Beginning on July 16, 1950, his was by today’s standards not a long life; but if deeds rather than
longevity be the measure of the man, Dave’s life was rich, full and well lived.

He grew up in a world far simpler than contemporary times, where conservative social values were the order of the
day and where institutions such as Church, School and the Scouting movement set the bar for acceptable conduct.
Participating eagerly in all the opportunities thus presented, Dave absorbed those values and held true to them for
the rest of his days. It was also a time where ‘people made their own fun’ and that statement vouchsafed a whole
world of hands-on activities where interactions with peers and their families generated a rich and supportive social
climate. While contemporary critics might label that view of days gone by as naive or uninformed, Dave remembered it as the foundation of a fortunate life and used the word ‘idyllic’ to describe his childhood.
Perhaps as a portent for the future, the fickle finger of chance meant that living next door in Mitchelton was Ray
Lindwall, test cricketer and one of the greatest Australian fast bowlers. The predictable result was that the whole
neighbourhood was cricket mad and Dave lived for the time that the great man would participate in our interminable backyard games. He showed considerable talents and participation in school and club cricket honed his skills.

It became a lifelong interest – perhaps ‘addiction’ is a better word, considering the blood, sweat and tears Dave
expended on behalf of the fortunes of Queensland and Australian cricket in decades of passionate support.

Supported and encouraged by his caring parents, Dave completed his schooling with great success, especially in
English and the social sciences. After earning a History Honours Arts degree at the University of Queensland, he
opted to become a secondary school teacher through completing his Diploma of Education. Posted to Murgon State High School, Dave began another chapter of his life in his first extended period away from home. The ten years he spent there exposed him to a side of life and a cast of characters that would leave him with another set of enduring friendships and a fund of entertaining stories that appeared bottomless. It also meant that the always present but carefully masked larrikin streak in Dave’s character was given free rein; not perhaps always wisely, but ever without malice and to the huge amusement of his kindred spirits. Professionally it was a difficult introduction to teaching, but he learned quickly and built a teaching philosophy that looked deceptively simple: ‘teachers teach, kids learn’. As Ashgrove students would later learn, underlying this dictum was a whole set of assumptions about what was – and what was not – acceptable behavior in his classes! He also claimed to have survived ten ‘educational revolutions’ in his time as a teacher by the simple device of ignoring the whole lot and getting on with his job!

In Murgon, Dave’s personal life also blossomed. He met and married a fellow teacher, Anne Durrant. Their two sons Geoffrey and Gregory would receive their vigilant care and direction through infancy, schooling and young manhood, before forging professional careers of their own. In due course, Dave also became the proud and doting grandfather of three grandchildren and lavished care and attention on them. It was in fact the demands of their sons’ education that caused Dave and Anne to move back to Brisbane. Posted to The Gap State High School, Dave sought with some difficulty to reintegrate to the demands of city life.

Fate intervened again, this time in the form of two Ashgrove stalwarts: Michael Gubbins and Brother Jack Alman.
Alerted to Dave’s considerable talents, both sought to make him ‘an offer he could not refuse’ in the form of joining
the Ashgrove staff. Memory suggests that he needed remarkably little convincing, but this may be looking through
rose-coloured glasses. Nevertheless, the deed was done and in 1984, Dave appeared for the first – but not the last – time in the ‘Blue and Gold’. It was the beginning of an enduring partnership between Dave and the College that was to their mutual benefit and was ended only by his recent death.

As classroom teacher, then teacher librarian and finally archivist, Dave gave his all as a loyal and talented employee
and it would be no exaggeration to say that his initiatives and activities became an integral part of the glue that
bound the Ashgrove staff community. Whether as organiser of textbook distribution, unfailing deliverer of the Courier Mail, organised and disciplined teacher, editor of College and Old Boys’ publications, passionate collector of College history and artifacts or supportive colleague, Dave threw himself into his job, revelled in its ‘busy-ness’ and added value to whatever he touched.

To get the true measure of the value of his contributions, one should however look far wider to all the ‘extras’ that
Dave involved himself in. As the most avid of cricketers, it was an axiom that he would coach that sport and the
Second XI in particular benefitted for many years from his knowledge and skills. (Anecdotally, Dave was also the
hardest umpire in Christendom to persuade that an LBW appeal had merit!) Claiming from his years of Rugby
League ‘up the bush’ that he knew nothing about the complexities of the 15 man game, he started out with junior
Rugby teams but soon acquired expertise and was the long-term coach of the Fourth XV. This laid the foundation for many legendary encounters between Dave’s Fourths and Derek’s Third XV, aka ‘Cameron v Cameron on Cameron’. Memory – again possibly faulty – says that only once was the lower team victorious. That day, Dave took the sage advice of his good mate Stanley Carr that the way to win was to play by the Maori Rules of Rugby (that is, none)! The results were not important for either coach – what was imperative was that each player be as skilled as possible, understand that there was no ‘I’ in the word ‘team’, and play the game for the fun it was obviously meant to be. The broad grins and camaraderie that marked training and games suggested that Dave achieved those laudable goals consistently. Nor was this the end of Dave’s sterling work. His sons had possessed considerable athletic talents and it wasn’t long before he was also involved passionately in Track and Field at the College. Many budding long and triple jumpers received wise counsel from Dave and his stalwart efforts combined with the athletes’ talents to produce many memorable performances on each year’s ‘Big Day Out’.

Fittingly he was also editor of the magnificent history of Ashgrove Track and Field, “Passing the Baton” published last year. Dave ‘the coach’ Cameron thus also looms large in any attempt to capture the breadth of his achievements. And yet it’s only when we dig beneath this long list of positions and contributions that we can truly understand what ‘made Dave tick’: to leave the quantifiable and venture into the realm of the anecdote and the vignette. He was always welcoming, whether in the library, the book room or the archives, and the rank or status of the visitor was of no account to Dave – you were worthy of respect until your conduct or attitudes indicated otherwise! Provincials, Brothers, parents, teachers, school officers, services staff members and past or present students all entered Dave’s orbit; to each, he extended respect, care, good humour and whatever skills he possessed to make your day easier or brighter. To anyone who was in distress, either professional or private, Dave offered counsel, care and support and he was the most loyal of friends. He did these things not because it was his job, but inherently – he cared about the world, his fellow travellers on the journey, and especially his Team, in the broadest sense of that word.

His laconic quips about the various situations in which he was involved, often uttered tongue in cheek and with just the occasional dash of cynicism, rightly achieved legendary status. To cope with the stresses of complex tasks and the added responsibilities of being a ‘people person’, Dave found both guidance and sustenance in routine. It probably didn’t escape the notice of family, work mates and friends that he was the proverbial ‘creature of habit’. You could set a watch by when he would appear and what he would do in any activity, as you could by the comments or quips that would greet anyone he met in the course of doing so. Whenever he found time for fishing (the great love of his recreational life) the routines adopted came close to driving his fellow anglers to distraction, so painstaking and repetitive were they. It should be noted that this did not stop rods falling off the roof of the car, or crab pots being thrown overboard without ropes attached – but at least Dave had theoretically taken precautions! Equally, Dave fancied himself from Murgon days as a horse whisperer able to divine the form guide and bet his way to endless riches. The reality was that every time he put a ticket into the TAB machine, it was another triumph of hope over experience.

Thus, Dave Cameron: husband, father, grandfather and brother; teacher, librarian, archivist and wordsmith; friend,
coach, raconteur, humourist and larrikin; would-be slayer of fish and hopeless punter. Each of these vantage points
offers clues to the measure of the man and their sum is a picture of a rich life, well lived. He was that enviable
combination of a highly educated individual who never lost the common touch, a richly talented man who used those talents in a way that bettered the lives of others. We are all poorer now that he has been taken from us, too soon.