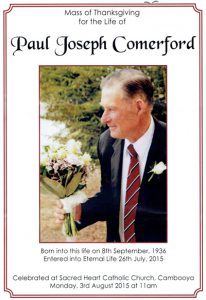 Paul Joseph Comerford was born on 8th September, 1936, and was the second of four children born to Joseph and Maude Comerford of Nobby.  His father was one of the pioneering farmers on the eastern Darling Downs.  Paul attended the Nobby State School for his early primary education, and was sent to the Marist Brothers College at Eagle Heights at Tamborine in 1946 as a boarder. In 1947 he transferred to the Marist College at Ashgrove for the Scholarship year.  He completed his secondary education at Ashgrove, sitting for the Senior examination in 1953. During his time at Ashgrove he was very active in sports, playing in the 1st XV Rugby team and the 2nd XI Cricket team

Paul returned home to Nobby at the completion of his education at Ashgrove, and joined his father on the farm.  He did a course of training in welding, which enabled him to construct or modify various machines and equipment used on the farm. He built sheds, seed bins, cattle frames for the truck, and many other items. He also virtually rebuilt the old home on the farm he subsequently purchased.

Paul was also one of the pioneers on the Darling Downs to tackle soil erosion. After almost 150 years of farming on the Downs much of the arable land had suffered from extensive soil erosion, much of it severe. By building contour banks across the paddocks to control rain run-off, particularly following severe thunder storms, and changing farming methods, much of the damage was repaired.  This was one of the early tasks he undertook, and successfully completed.

Paul continued to play many sports in the Darling Downs competitions:  He became a member of the Queensland Rugby Union squad, and played in the State team from 1956 to 1959, playing in both interstate and international matches.  Paul played for the local Allora and Clifton Rugby League teams, but also enjoyed other sports, such as tennis and cricket. He was a member of the Nobby Tennis Club and the Nobby Cricket Club, representing those clubs in local competitions, such as the Back Plains Cricket Association (until 1990), and also played basketball in the Clifton Basketball Competition.  He was secretary of the Nobby Cricket Club for a number of years, and currently is a Life Member.  He is a Past President of the Nobby Tennis Club.

On 14th December, 1974 Paul married Margaret Mary Noble, whose father was a farmer at Freestone east of Warwick, and who was a Primary School Teacher, with Father Kevin Noble, Margaret’s late brother, the Celebrant of the Nuptial Mass, in St Mary’s Church in Warwick. They had 4 children: Matthew born, 1976 (Matthew and his wife are Chiropractors); Anne in 1977; Peter in 1979 (Peter has trained as a cabinet maker and a builder); and Catherine in 1981 (a physiotherapist, and married to a farmer at Capella in central Queensland).

Paul died suddenly in his home on 26th July, 2015, shortly after returning home from a visit to Capella to be with Catherine who recently gave birth to her first child, Elsie Margaret Daniels. Following a Requiem Mass at St Mary’s Church at Cambooya, celebrated by Father Rod McGinley, Paul was buried in the Nobby Cemetery, which overlooks the old family farm, and where his father and paternal grandmother are buried.

May he rest in peace.