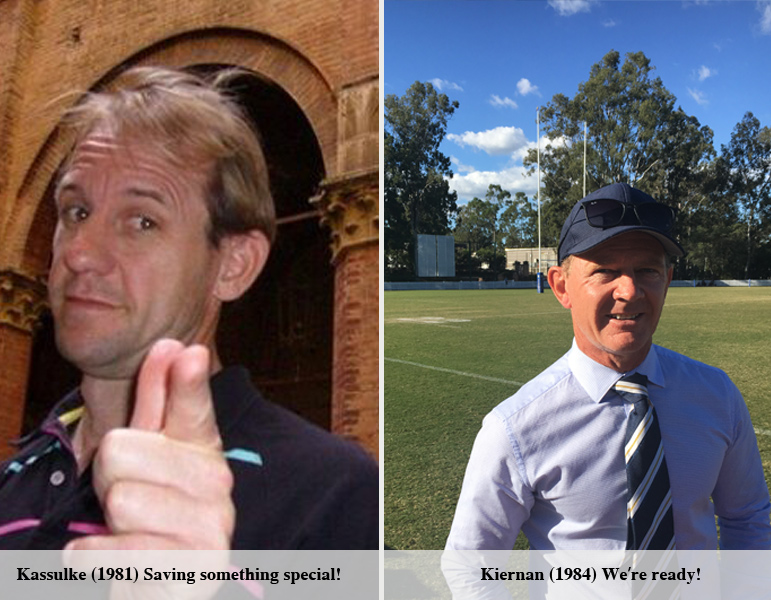 We only knew he was there because we could hear the 30 pieces of silver jingling in his pocket as he walked slowly down those very same steps on to No1 that he used to glide over all those years ago. Some reconnaissance perhaps ? He is much humbler than his legendary Uncle Brian (5 years in the F…irsts) and older brother and Wallaby Nigel (1978) – but to those in the know, there is simply no more astute rugby brain. And it has been plotting away all season for this weekend’s decider.

Designated by super coach Barry Honan as the safest hands Ashgrove ever produced (not one dropped ball – ever), OB Craig Kassulke, at no 10, stood behind Ashgrove’s most versatile of all forward packs to guide that magnificent 1981 team to the title.

The CV is impressive. Souths Rugby Life Member, Brisbane club rugby legend, successful grade coach — And now VILLANOVA First XV coach. Yep, you read it correctly Old Boys. VILL-A-NOVA ! Our hearts break. This Saturday, Craig clashes head on with another star of the 1980’s, Brendan Kiernan (1983/84), who now coaches Ashgrove alongside fellow OB David Miles (1992). Brendan told the OBA “Back then, I used to sit in awe watching Kassulke control that phenomenal 1981 side like he was conducting a symphony. I don’t think there has been a team like them since. Craig is not only a tactical genius but was a ferocious competitor for 25 years on the club scene. We just know he is saving something special for Ashgrove – but David and I are ready for him. We have told the boys there is nothing to fear. Probably.”

We hear they have even mown the grass out Tingalpa way as Saturday sees the ultimate test for both legendary Old Boys when the 2017 First XV face their last hurdle in the quest for the first UNDEFEATED PREMIERSHIP in a decade. We wish all three of our OB coaches a great match – but forgiveness ? That will have to await the result. Above all – good luck from all Old Boys to Ashgrove’s young men of 2017 in their final game for the College. Viriliter Age!