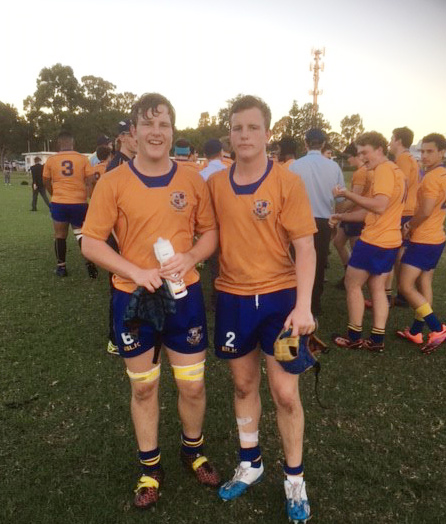 Those fortunate enough to watch Robbo’s and Cookie’s scintillating, undefeated teams of 2004, 2005 and 2006 will never forget the half time entertainment. Not Wardy’s modern day Sumo Suits but the four year old Dangerfield twins who each week wrestled one another in front of a packed grandstand while their older brothers led Ash to victory on the field. That Dangerfield entertainment often stretched right through the second half as those pesky boarders took sides and egged the little fellas on. The odd person even took some time out to watch the game.

What ever happened to those funny little guys who brought us so much joy ?

Well, it just so happens the twins decided to wrestle the opposition instead and picked up more silverware on Saturday to add to the overflowing Dangerfield mantlepiece. Nick (2004), Jack (2005/2006 captain) and now Matt and Tom (2017) all have UNDEFEATED PREMIERSHIPS to savour after the First XV were truly magnificent with a thumping victory over Villanova. Great stuff boys !

Now its time for a rest for poor old Stephen and Liz Dangerfield (a nurse on the sidelines for countless matches) who (but for a few years break) have endured 21 years of school fees, sport, excursions, school fees, sports tours, mud, school fees, broken bodies and not to mention – school fees. And still provided free entertainment at half time for the masses. Outstanding ! The rugby contribution of the Dangerfields and also the McWhirters (5 boys in the Firsts until 2014) has also led to calls for a new scoreboard in their honour. It might even be time to retire those poor, exhausted Maths C students and replace them with an electronic version that actually works – but then again what would those guys do for their Term 2 assignment ?

The Old Boys acknowledge the sensational contribution of the Dangerfield Family not only to Rugby but to all facets of College life over the decades. Their generosity is always without fanfare. We congratulate the First XV on achieving the first premiership since 2011 and the first undefeated premiership in a decade. But always in the Ashgrove spirit.