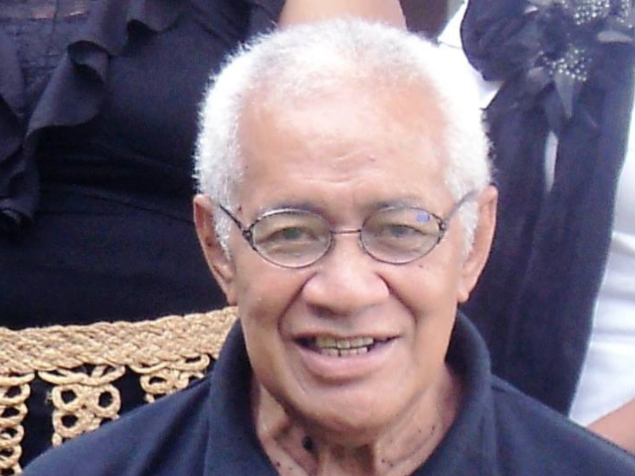 While Dan Tufui (53-54) was not the first overseas student to board at Ashgrove, but the first to come with a Purpose. At the time, only one Tongan, the Prince, had a degree and Dan, who was a convert to Catholicism, wanted to study law and required his Matriculation first.

Ashgrove would be Dan’s finishing school, preparing him for the day he returned to his country to lead his people. This was the sort of missionary step of which Fr. Walter Cain would have thoroughly approved. Dan Tufui would be an icon of Ashgrove’s contribution to the development of that Marist missionary vineyard, the South Pacific.

That Ashgrove did make a lasting impact on Pacific politics, starting with Dan Tufui, was due to the quality of the boys who came and the mutual respect that developed between them and the Brothers. From the start, Dan stood out for his pleasant courtesy, his commitment in games and study and his quiet good sense.

“I remember Dan Tufui well at Ashgrove, mainly from playing with him in the Fist XV. It was clear from the outset that Dan had played Rugby before, and that he was gifted at it. Quietly spoken then and a thorough gentleman in the making, Dan went about playing Rugby with a purpose and insight into the game that brought results. I always imagined that the way he played his Rugby was typical of the way he treated others and respected himself and planned his future. I knew that he went on to study Law at UQ, and it certainly did not surprise me when years later I heard that he held a prominent position in the Judiciary in his home country. Our Rugby coach in 1953 was Br Justinian, who often excitedly related the incident when years later, after deciding to leave the Brothers and visiting Fiji with his family, he ran into Dan Tufui who certainly welcomed him like a long-lost friend.”

When he matriculated to study law at University of Queensland, he stayed on at the College, living in the tower of the Tower Block with fellow tertiary students, Bill Broad (Dentistry) and Jim Forbes (Medicine) and helping coach Athletics and Rugby. After some experience with the Brisbane firm of Feez Ruthning and Company, he returned to Tonga in 1964, he served as Solicitor-General 1965-72.

The MCA 1953 undefeated premiership 1st XV was captained by Des Connor, while Dan Tufui was considered the Best Forward in the Ashgrove pack. Dan was selected as a representative of the Metropolitan Secondary Schools Association (MSSA) team which defeated their GPS opponents 8-5.

In 1954, Dan won the College Open Championship and then at MSSA, after coming second in the open shot put, set records in the open broad jump and hop step and jump that would take many more years before they were broken. During the 1954 Athletics season, Dan had leapt 44’2” in the triple jump. In 1966, Mark Harris (SPLC), in his third and final year contesting the open triple jump (aka hop, step and jump) set the new record of 44’10 ¾” (13.68 m) which once again would stand for a great length of time.

The 1955 B&G recorded the College’s appreciation for the “Dan Tufui’s help in training the College boys in Athletics”.

Dan Tufui was one of the first four Law Lords appointed to form a new judicial committee of the Tonga Privy Council in September 2008. The position of law lords had not previously existed in Tonga and was directly inspired by a similar institution in the United Kingdom.

Tufui was appointed to the council by the late King George Tupou V as part of the process by which His Majesty relinquished certain of his powers, but sought to keep control of the appointment of Judges and King’s Counsels, clemency and the commutation of prison sentences. That same Tufui was awarded the Order of Queen Salote Tupou III, Grand Cross.

During his career, Tufui served the Kingdom of Tonga in a number of capacities. As a barrister, he became the first Tongan to head the Law Department when he was appointed Solicitor General from 1965 to 1972.

Tufui served as Chief Secretary to the Government of Tonga and Secretary to Cabinet for many years until ill health led him to resign in 2003. From 2004 he was a member of the later Prince Tu’ipelehake’s national Committee for Political Reform. He served briefly as Acting Chief Justice of Tonga in 2006.

He was chairman of the Pacific Forum Line and sat on the boards of a number of regional boards and organisations.

He represented Tonga’s interests in New Zealand  on several occasions; fighting the New Zealand Seamen’s Union in the 1970’s where it wanted all goods destined for the Islands to be carried on New Zealand-manned ships and leading trade missions in the 1980’s to bring New Zealand business and manufacturing to Tonga.